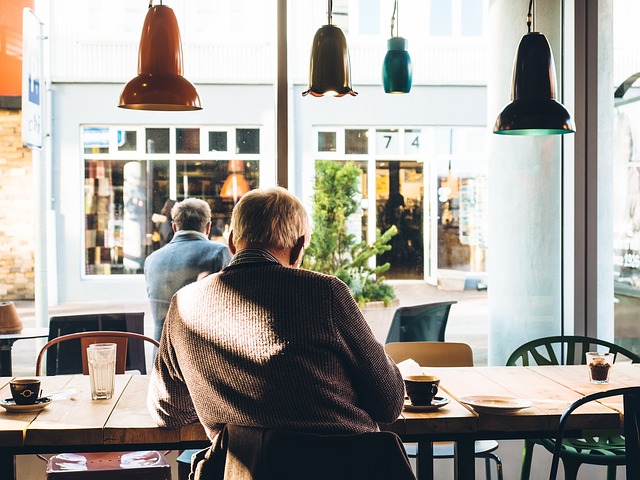 The light reflected off the glossy exterior of the large menu. His eyes scanned over the choices in front of him. He had been here before many times in his life, but his experience in ordering food had yet to make this predicament any easier for him. His choices were already limited because Mary had chosen to order them each a cup of coffee. Her ordering his drink confined his choices for a meal. Now he had to get breakfast food. It was half past ten—an acceptable time to order something for lunch—but now that the waitress was bringing two steaming cups of coffee to their table he had to abandon the possibility of having lunch food.

“Do you need a few more minutes to look over the menu?” the smiling waitress asked the pair.

Mary looked at him and then looked back to the waitress.

“Yeah, we’re going to need a little longer,” she said, raising her voice to a higher pitch like she always did when she talked to waitresses or store employees. The waitress smiled politely and left the couple alone. “What do you want?” Mary looked at him.

He looked back down at the menu. He had only just decided if he was going to be eating breakfast or lunch. And now that he was eating breakfast, he had to decide if he wanted to eat a large meal so he wouldn’t have to eat again until dinner tonight, or if he should have a small meal so he could have a pastrami-on-rye sandwich for lunch, like he had been craving.

“I’m not sure,” he said, deepening his stare. He turned the page back from the lunch options to the breakfast options. Did he want eggs or an omelet? If he got eggs he would have to decide if he wanted his eggs cooked over-easy or over-hard. He only ordered eggs over-easy if he was getting hash browns as well. That way, he could mix the yolk with the hash browns. If he got hash browns he would have to get sausage to eat with them, and he had just eaten sausage for breakfast the day before, when Mary had left for work early. He hadn’t even really wanted to eat sausage that day, but he felt like it was his only chance. Mary hated the smell of sausage. And when she was not at home the other day, he was able to have sausage without upsetting her because he filled the house with the smell of sausage. Today he did want sausage, but it was probably best not to upset Mary. He pondered ordering an egg cooked over-hard with toast and three slices of bacon, but why order something he could easily make himself at home? He looked over to Mary who had closed her menu and was composing a message on her phone.

“Do you guys still need a moment?” The waitress had appeared again with her notebook and pen in hand.

“We need to be done with this by quarter after eleven,” Mary told him while swiping though messages on her phone. “Just get the fried chicken like you got last time.”

“I can’t get the fried chicken,” he reasoned aloud. “I’m drinking coffee.”

Mary sank into her seat. He looked back at the menu. He could get an omelet, but if it was too much to finish in one sitting, he would have to get a box to take home the leftovers. And egg never tastes as good once it has been microwaved. He supposed he didn’t have to eat the leftovers. But he would have to take them home so Mary wouldn’t remind him of the starving children in Africa who would be full of his breakfast leftovers for the rest of their lives. Even though he had to take the leftover omelet, he could just throw it away while Mary was out. But if he threw out the omelet and then got hungry later he would regret it.

“I think I want an omelet,” he said to Mary.

“Great!” she said in relief. “What side are you going to get?”

He had forgotten that he had to choose a side with his omelet. He could get hash browns, but he wouldn’t like them as much without over-easy eggs. He couldn’t get sausage because Mary hated sausage. He only really liked bacon if he could dip it in maple syrup. But he didn’t like the way egg tasted after he had just eaten syrup. If he ordered pancakes for the side, he would most definitely have leftovers that he would have to take home to throw away before Mary came home from work. But since Mary had been working late recently, he would have plenty of time to throw away the leftovers without feeling guilty for wasting food that starving children would like.

The waitress was back.

“Yes, we are,” said Mary. Her voice was very high-pitched. “I want scrambled eggs with toast.”

The waitress scribbled down Mary’s order while she waited for him to tell her his order.

“He wants an omelet,” Mary said.

“With what side?” asked the waitress.

The waitress looked back and forth between the two waiting for one of them to answer her.

He rubbed his temple. Mary stared at him. Her fake smile grew less and less friendly with every second that he hesitated to answer the waitress.

Mary’s voice rang even higher than it had before.

“I… will… have… sau-bac-pa-sausage! I will have the sausage.” He told the waitress proudly while she took the menus from them.

“I hate the smell of sausage. You know that.” Mary rolled her eyes. “Honestly, could you be more considerate?”

“I could change my order?”

“Please don’t!” Mary pushed his raised hand down from waving the waitress over.

“I have something I need to tell you, but I’ll wait till we get our food,” Mary told him and then returned to her phone.

He should ask her a question. He could ask about work. She had been working a lot more recently. He could ask her about the “big project” that she had been working on with her boss, Clayton. Clayton had been friendly when he talked to him at Mary’s company barbeque in the summer about football, even though he really didn’t know much about football. Clayton said that Mary was very good at what she did. He was happy that Mary and her boss got along so well. He spent so much time considering what to talk to Mary about that neither of them said anything to the other while they waited for their food to be brought to them.

Mary turned her nose away from the plate of sausage that the waitress sat down in front of him on the table.

“Can I get you guys anything else?”

The waitress looked at Mary when she said this.

“No, we’re fine, thank you.” Mary answered for both of them.

But he was going to ask for ketchup since there was none at the table and he wanted some to go with his omelet.

“I need to tell you something,” Mary said. She sprinkled pepper onto her scrambled eggs. “I am sure you know that…”

Mary kept talking, but he focused on his omelet. It would taste fine without ketchup, but he would much rather have eaten his omelet with ketchup than without. He couldn’t call the waitress over while Mary was talking to him, but he wasn’t sure how long she was going to be talking, and his omelet might get cold.

“I’m moving out.” Mary said snapping her fingers in front of him. “Did you hear me? I have been seeing Clayton. I am moving in with him.”

He couldn’t decide what to say. He had never suspected that Mary had been cheating on him. He had just thought that she was doing well at work. He could ask her to say, but he wasn’t sure if he would like her as much now that he knew she had cheated on him. He reached for his coffee to postpone replying to Mary for just a moment longer, but his coffee was cold and he wondered if it was wrong to ask for a fresh cup while Mary was waiting for him to say something.

“Forget this,” Mary said and stood up from the table. “This is exactly why I’m leaving. You never listen to me!”

The waitress hurried over. She looked worried and embarrassed.

“Is everything alright?” She asked.

“Can I get some ketchup for my omelet?” He asked, and took a bite of his sausage.