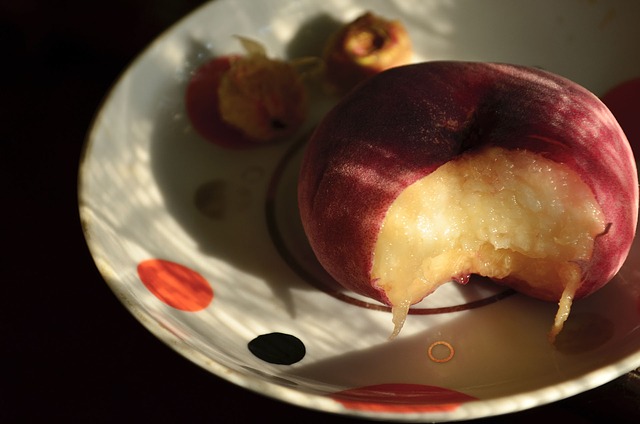 The humid southern air was stickier than the floor of a two-dollar movie theatre; it caused her delicate cotton dress to cling to her as she wove her way slowly through the crowded farmer’s market. A momentary respite, a soft gentle breeze, fluttered the brim of her wide sun hat. Undaunted by the oppressive temperature, she sidestepped a middle-aged couple that stopped in front of a booth to smell a bouquet of fresh primroses. She seemed drawn, lured by an unseen force to a destination she knew instinctively.

Far to one side, away from the shade of nearby buildings, she paused in front a stall filled with local fruit. A vendor pushed beautiful peaches in her face, cutting away a small slice with an Old Timer jackknife to show the succulent flesh inside. She smiled coyly, placing the offered peach slice delicately to her mouth and dabbing the sweet juice on her lips before taking a gentle bite. The vendor appeared overjoyed at her nod of approval. The woman in the hat held up two fingers, the man with peaches placed two of his finest into a bag, and the woman walked away. A larger man in a Hawaiian print shirt stepped forward from the crowd suddenly, thrust two crumpled dollar bills into the vendor’s hand, and grabbed the small paper bag. He then turned and disappeared into the crowd after her, never speaking and never smiling.

Like the summer run of salmon, they pressed on through the throng, weaving around people that milled about in the pathway. With her smaller frame, save for her large, round, Lolita sunglasses, she negotiated the route through the crowded Saturday marketplace better than he did. The pulse of the mob slowed him down.  He gave chase, desperately trying to see over the top of the other patrons for a glimpse of her hat. He was like a hunting dog, relentlessly trying to keep track of his quarry. He only paused for a moment when he bumped into an elderly couple in his haste.

She was hard to keep up with. She was doing it on purpose, he knew it. The thought both infuriated and amused him. What was her plan if she lost him? He knew what she was after and he had a pretty good idea of where she was heading. What was the point in making him catch up like this?

The marketplace seemed to stretch for an eternity. Several side-streets had been closed to make room for this bi-weekly event. Stalls were set up everywhere, even in a few alleys. But the farther he chased her, the easier it became. The crowd began to thin and vendor stalls were fewer. He turned a corner moments after she did and was within a few steps of her.

They finally reached a group of orange barriers that signified the southernmost boundary of the market. The woman stopped. He stopped a few steps behind her, standing perfectly still, breathing a little heavily and clutching the bag of peaches. There was no crowd here. Aside from a few vendors loading and unloading trucks, the street was empty.

“Are we alone?” She spoke over her shoulder as she moved between two parked cars, searching for a little more privacy, whether real or perceived.

“For the most part, yes.” He glanced around as an afterthought, then followed her to the space between the cars.

Her nearly transparent sundress fluttered in another breeze, tousling her light brown hair under her hat. He slowly opened the bag and held out one of the plump peaches in his palm. She got to her knees in front of the waist-high fruit and inhaled its sweet aroma. A sly grin spread across her lips as she lowered her sunglasses with one finger and her sparkling green eyes met his, which bore a striking resemblance to her own.

With a wet “thunk,” a long, pipette-thin proboscis jutted out from the back of her throat, skewering the peach. She drank deeply, draining it until the skin was shriveled over the stone. Her eyes rolled back in pleasure as the soothing narcotic sensation washed over her body. Her sticky proboscis withdrew and she closed her mouth, still shaking from the rush. With a trembling hand, she pushed her sunglasses back up to hide her now reddened eyes.

“My turn,” he said as he placed the second peach into her still trembling hand, steadying it with his other hand while she continued to kneel. He was quicker to drain his fruit and crumpled to the ground seconds later, reeling with pleasure.

There was a pause of only a few seconds before the two struggled from the ground. He put on a pair sunglasses and they both shook their bodies as their short fix wore off.

They straightened their clothes and turned the corner, disappearing again into the horde of oblivious shoppers, off to find another fix.