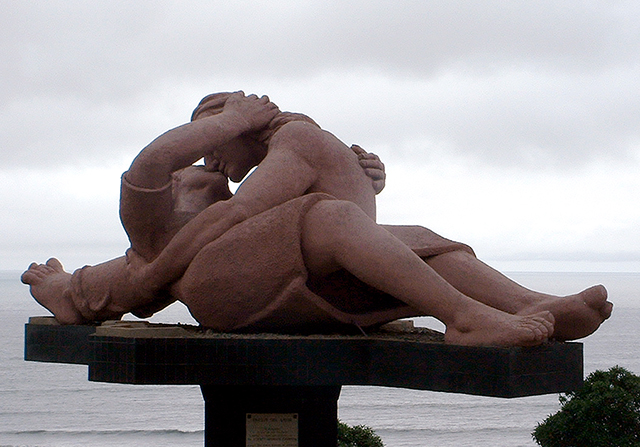 She said her Perfect Man would have one,
an old leather jacket, worn ten years.
So I went out and bought you, on
Newbury Street, down at the punkrock end,

Where the skaters whizz by like stray bullets.
You fit snug at the shoulders, even then,
short-waisted, cut for the rough road.
A “motorcycle jacket” you’re often called,

the way the perforation along the square shoulders
suggests a venting-in of rushing wind.
I’ve never owned a motorcycle, not even a fast car.
Nevertheless, you cap off the cliché

I’m willing to be: boots and tattoos,
outlaw chic, armor-skin, wild animal hide.
I couldn’t afford you but I’m convinced
you’ve been worth it. Folks from every circle

have stopped to compliment your rugged beauty,
fashionistas and rockers, even the highway-worn
men at truck stops, nodding approval as they climb
back on their bikes to spray dust across the parking lots.

You were all I needed for warmth on lonely cross-
continental treks, all I needed for storage, walking
to cafés with pen and pad and cigarettes.
I know it was you that caught the eyes of girls

in dim saloons, you that made me seem darker,
brooding against the walls. And on dark, chilly nights
in Charlestown, you propped up my scowl and kept
muggers poised but reluctant, thinking
he’s not worth the trouble, don’t risk it.
These recent years, I like you best in L.A. winter,
the grey weeks near the turn of the year, the temperature
dipping into high forties by the beaches at night.

She found her man some time ago,
perfect to her I’m sure.
Their babe nearly crawls now.

But you and I remain, in the sensible apartment, in the four-door sedan.
Draped over a chair, in fading window light
you still have the rebel hunch, like ten years ago, like
you’re still as tough and wild as when we were new.

But scars have appeared: a red speck of oil paint dots your cuff,
some lost drop of blood, where I brushed an unfinished canvas.
And a handful of change, placed in your mutilated left pocket
would eventually lead me back from whence I came.