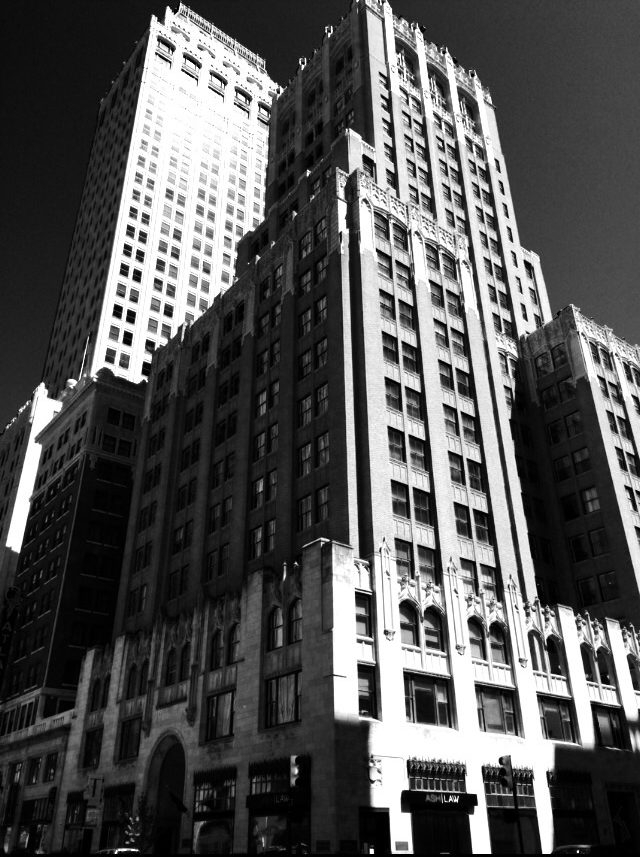 The neon sign in the window of the liquor store switches off just as he steps from the curb.

The brown paper bag clutched in his fist is wrinkled as a turkey neck. Even through the rearview mirror, I can tell the weight of the bag by the way he handles it, his calloused knuckles white, wrapped around more than just one bottle. His other hand is busy lighting the end of a cigarette, which dangles crookedly from the corner of his mouth. The already hawkish features of his face collect elongated shadows and his greasy hair shines a greenish yellow beneath the fluorescent dawn of the streetlamps. He’s a skeleton in skinny jeans.

The night has become our morning. We’ve lived by the lights of the city—the streetlights and stoplights, the neon signs in bars and strip joints and pawnshops and convenience stores like this one—for almost a year now. Tonight, the whoosh of the wind funneling through the alleyways of the promenade sounds like the flush of a toilet. The sound of endless opportunities and bright futures going down the drain.

I jam my finger down on one of the buttons on the car radio, cutting off Barbara Lewis mid-verse, before he slides into the driver’s seat. His door creaks open and he stoops into the car’s cracked leather interior, tossing the heavy bag into my empty hands.

“I got your favorite,” his voice rumbles and his dry lips part into a snaggletoothed grin.

Jim has a face like strawberry jam—his cheeks all pocked and ruddy from ancient acne scars. He removes a square-shouldered bottle from the bag. Filtered through green glass, the clear liquor is the color of mint-flavored mouthwash.

“Don’t I get a thank you?” he asks, brandishing his own bottle, a flask-shaped jug of some high-proof off-brand whiskey.

I hate drinking. But I hate listening to him talk more. On nights like this, when he has too much, which is most nights, he’ll chase his malt with longwinded spiels, the topics wide and dull. But because his verbal battles are unwinnable, I’m self-taught in the art of strayed attention and by the time the schnapps are half gone, his voice has faded to an indiscernible roar. The heady alcohol knows just how to silence my mind. His hot words bathe my face in a fiery discourse, his dragon breath a cloud of soured smoke and milky moonbeams. But these nights are better than the nights when he doesn’t drink enough.

It’s not until he touches the blazing end of his cigarette to my inner thigh that I realize he’s been saying my name. I gasp and recoil, slapping his hand away and knocking the stub to the floor.

“Asshole,” I hiss, brushing the ashes from my leg.

“Oh, come on,” he rasps, his words floating somewhere at the opposite end of a long tunnel. “You know I love you,” he adds, retrieving the cigarette from the floorboard and tossing it out the open window.

I glance at him sideways, my vision losing focus as I take another swig from the schnapps.

I keep my eyes trained on the young couple sitting on the sidewalk across the street.

“Look at me,” he orders, clamping a hand around the back of my neck and swiveling my head around like a stiff Barbie.

I lean my cheek into his caress, rolling my eyes in his direction. His tongue idly traces the dip in his lip where ten thousand cigarettes have cut a shallow valley.

Then he says, “Why don’t you go get us some condoms.” The words themselves are a request, but he doesn’t say or mean them like one.

Jim releases me and lifts himself off the seat, retrieving his wallet and digging out a ten. He waves it like a tiny flag in front of my face. I attempt to snatch the bill from between his pinched fingers once or twice before I’m successful, not meeting his eyes. Sandwiching the schnapps between the seat and center console, I look down at my feet. We left my sneakers in the motel when the super realized the credit card we’d used was stolen. He said if we didn’t want the police involved to make like roaches and scatter, so we did.

I climb out of the car and my feet touch the cool cement. I take a deep breath, grateful for air not saturated with the stink of his cat piss spirits.

“Hey, and get the ones I like,” Jim hollers out the window. “None of that latex shit. And some energy shots.”

I make no sign of acknowledgement; I know how much it irritates him.

Across the lot from the desolate liquor store is a rundown Conoco, the registers inside manned by a two-person crew.

The couple I’ve been watching, a boy and girl, maybe sixteen or a little older, sit pretzel-limbed on the weed-choked sidewalk outside in front of the ice machine, their spines kinked like drooping dandelions. Their faces glow, ghostlike, in the severe white of the station’s industrial lighting. I pretend to focus on my fingernails, the dark polish chipped around the edges, but can’t avert my eyes from them as the boy plucks a bent flower from the crack in the pavement and tucks the delicate stem, and a stray lock of pink-streaked hair, behind the girl’s ear. His touch seems gentle and the top of my ear itches—

A loud pop, almost like gunfire, explodes from inside the gas station. I look up. Through the storefront windows, the metallic glint of a small black pistol winks under the harsh troffer lights. I freeze; my eyes locked on the hooded figure holding the gun, as the couple springs to their feet and scatters, the rapid scraping of their sneakers on the asphalt the only sound in the night. They’ve disappeared around the side of the building before my brain can process what’s happening. Inside, the shooter slams a backpack onto the counter next to the register and barks orders at the cashier who’s still standing. His shouting is muted by the glass doors between us.

Jim is out of the car now, the glowing embers of his Parliament drifting to the wet macadam like drunken fireflies dropping dead in the air. He’s standing behind the driver’s side door, raising his voice at me, the syllables of my unfamiliar name dripping from his tongue like acid. But my mind is misplaced, out of sync with my body, like a dream where life moves in normal speed, but everything I do is in slow motion. I’m still standing in the same spot, stone-faced, when the man—in his late thirties maybe, sporting three days’ worth of scruff and tattered Nikes—emerges from the mouth of the station. His eyes are bloodshot and wild. They dart from me to Jim, who’s moved to just inside the limit of my peripheral vision, then he turns his back on us and pounds his sneakers into the pavement.

Flyaway paper tumbles out of the man’s pack, catching the wind and drifting down the street, mingling with dried leaves. He doesn’t stop for them.

With the wide arc of an oscillating sprinkler, the man raised his gun and two more cracks of thunder split apart the night. The man’s shapeless form, clothed in loose jeans and an oversized t-shirt, slips away, gradually blending into the environment. I force my eyes away and turn around.

Jim is spread-eagle on the dark asphalt, his bare chest spattered with a spray of red like wine on white carpet. His face, a tiny moon in the darkness, is sallow and shadowed in places, his dimpled cheeks deep and sunken in.

Just ahead, the wailing of two crazed voices echoes against the building. I glance up to see two men crossing the lot. One of them is on his cellphone, his free hand tangled in his windswept hair, the guy behind him is hollering, his misty eyes growing wider with each step that brings him closer to us.

“Holy fuck!” he whimpers, a broken cry escaping his lips at the sight of the dead man. “Holy fuck, he’s dead…” The last word curls up at the end, like a spider’s legs upon its death.

While the guy on the phone keeps a safe distance between himself and us, trying to piece together his disjointed sentences, the other stops and stares. His clear blue eyes rake over me, apprehension coloring his face. It’s always the same expression when someone first sees me, my eyes dark and round like a dumb farm animal, arms and legs willowy as a gazelle, all spotted up like a cheetah from Jim’s caresses. His eyes come to rest on my feet.

“Y-you okay?” he asks, his voice settling at a relatively normal level.

I follow his gaze down, where a bright red flower has bloomed beneath Jim’s body. The tips of the liquid petals are starting to tickle the tips of my toes, the pooling blood warming my cold feet.

Lifting my foot, I nudge Jim gently, as if he were some helpless beetle who has flipped onto his back and can’t right himself, my toes leaving prints on his soaked shirt. He doesn’t budge.