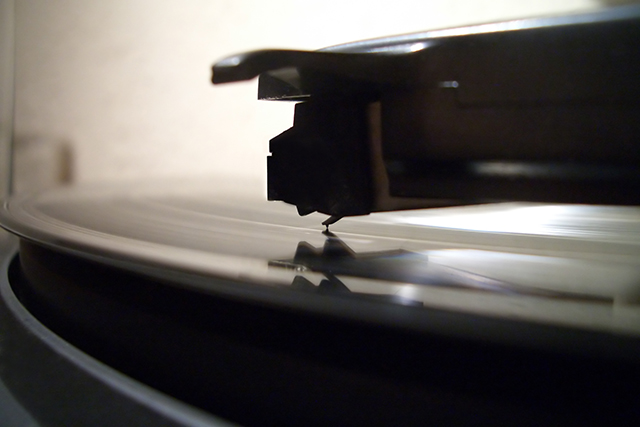 The needle traced the grooves and rode up and down with the slight warp of the vinyl. First, the motion produced no sound, then the hissing and popping began. He had hoped the flaws wouldn’t be so conspicuous. For him, the imperfections were comforting, often more so than the music itself. Suddenly he felt exposed. But being embarrassed of something that gave him such pleasure made him feel younger. At least there was that.

He looked over at his guest, who was fiddling with some knickknack on the shelf, maybe not even aware of the sounds. They’d agreed to play each other one song, so technically her part of the bargain started when the actual music did. And he was afraid now. He had debated playing something she might know: Johnny Cash, or maybe the Ramones. He reasoned that she would just have more excuses to find flaws in the medium if it was something she had heard before. So why not choose his favorite, something he chanced that she didn’t know.

The vocals were muffled below the static, but they were still audible. I could say it’s over now / That I was glad to see you go. She smiled and he could breathe again; not that he hung so much on her appreciation of the song, but he didn’t look forward to having his justification fall on deaf ears. He didn’t even know how he was going to handle this contest if there was no clear winner.  He had learned. It had taken a very long time, but he knew that being right wasn’t always what it was cracked up to be, especially about something as trivial as music, something that ultimately came down to taste.

For another moment, he enjoyed watching as she continued to smile. I could hate you for the way I’m feeling / My lips could tell a lie, but my heart would know. Beyond the archaic medium and the lack of quality, he had second-guessed this song because of the lyrics, though he was sure they hadn’t reached the “encoded messages in songs” part of their relationship yet. They had only been talking a few weeks; in fact, this was her first time over to his apartment. Still, he knew he would read far too much into whatever she chose, when it was her turn. For the moment, however, he was delighted at her apparent enjoyment.

She spoke, but quietly enough that it was evident she was trying to be respectful.

“You’re funny. . . which would make you more uncomfortable?” She laughed. He honestly didn’t know which would. “Actually, neither,” she said. “It’s in Cars.”

“The…cartoon?” The urge to fly into an overly dramatic rant about the sacredness of music and the vapidity of children’s movies began to boil in him. He had never seen the movie, but he was sure it was terrible and he would have likely walked out in protest at the inclusion of this song. But he had to ignore that for right now. He didn’t want to scare her off. This might still be salvageable.

“It’s all right. This part is pretty sad. But now I have an idea of what to play for you.” She smiled coyly, as though she had thought of the perfect song, a song that fifty years from now would be “their song,” or would at least fix this fiasco despite her obliviousness to it. For the moment though, she sat and listened to his song to be polite.

He honestly didn’t care about the song she had chosen. He began to realize this had been a mistake. He could win any contest about whose song was better, and it wouldn’t even be a challenge; he had on his side truth, history, and people smarter than both of them. But at what cost? Was she worth it? He still barely knew her. He was no longer enjoying this experiment, and he considered turning off the music, but that would show his hand. She would surely realize he was pouting, then.

She was already at the computer. The glow from the screen lit up the small, dark room. Her fingers typed, then typed some more.

“I can’t ever remember how to spell it,” she said.

That was a dead giveaway. He knew what she had chosen. He hoped he was wrong, but the signs were all there.

“Oh man, so many versions. I think this is the one.”

He didn’t even need to hear the music. The only question he had was whether she would click on the one he wanted. He doubted it. She clicked the mouse, then came over and sat next to him as the unmistakable piano chords began.

“This is not the version from Shrek.”

“What?” she said. “I’m sorry. Do you know this song? Is it sentimental somehow? I’m sorry.”

He shut the door behind her. Then he walked back across the room and dropped onto the couch, face in his hands. Realizing the music was still playing, he smiled as he listened.

All I ever learned from love / Was how to shoot at someone who outdrew ya.